Under the Unnati initiative, HCCB has partnered with Jain Irrigation to support mango and orange farmers in increasing their yield. The traditional practice is to grow large trees at every 10 metres approximately, which leads to loss in productivity over a period of time. The new-age technique of UHDP ensures that high yielding, low height mango trees are grown in less than 1/3rd the original area thereby increasing the productivity and income of farmers. 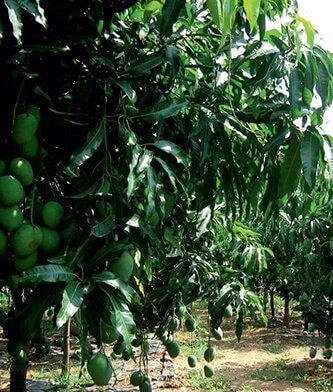 Ramesh Naidu, a farmer from a small village in Chittoor District of Southern India, lives in a joint family along with his brothers, their spouses and children. Like every parent and head of family, he aspired to dream big for his and his brothers’ children. But this was almost impossible due to the severe drought that had afflicted his village around 15 years ago.

Like Naidu, many farmers across the country have been dependent on nature for their farm’s yield and often struggle to provide consistent and large amounts of produce. As a result, their output and agricultural income suffer.

But this son of soil bought 35 acres of land in his village from his major business savings in Bangalore. He bought an existing orchard of mangoes, but wanted to make agriculture more profitable. That’s when he decided to try the Ultra High Density Plantation (UHDP) programme under Project ‘Unnati’, a unique and sustainable agricultural practice.

Like the 1,000 farmers across Chittoor districtand many more states, Naidu is part of Project Unnati, a Coca-Cola India and Jain Irrigation initiative to increase productivity of the local mango crop. Jain Irrigation processes the mango pulp and is the largest supplier to Coca-Cola’s Maaza brand, which is now in its 40th year. Maaza uses Alphonso pulp which is sourced from farmers in Maharashtra and Gujarat.

Now, Naidu is hopeful that his 14-acre mango farm at Samireddypalli village, 12 km from Chittoor town in Andhra Pradesh, will yield five tonnes of mango per acre this year. Having taken up the UHDP programme three years ago, Naidu planted over 600 trees in an acre, compared with just 40 trees in the traditional practice, which yielded him just 1.5 tonnes of mangoes an acre.

The objective is to harness the higher productivity potential of mango farms to benefit all stakeholders in the ecosystem. Farmers gain through increased yield, Jain Irrigation buys better quality produce and Coca-Cola can source this key ingredient locally for Maaza.

While in phase 1, Unnati has successfully trained farmers on UHDP technology and encouraged them to adapt to the new, sustainable agriculture practices, phase 2 is focused onbuilding deeper relationships and engagement with farmers.

Today, Ramesh Naidu is happy that he has been able to bring his parents back to their native place and generate enough money to be self-sustainable in the village itself. He is happy that like every parent and head of family, he had aspired to dream big for his and his brothers’ children. And now, he has sent two of his sons and a nephew to pursue a career in Engineering at Bangalore and Hyderabad respectively. That’s not all. Naidu has even encouraged his daughter, who goes to a school far away from their village in Hyderabad, to pursue higher education.

Hey, I noticed your Article. I just loved it. SLN Ventures achieved success through immense care in planning and choosing the right resources and execution, be it the drawings, construction material and Vaastu to a clear title. One of the finest best real estate companies in hyderabad. Find your place that is waiting for you nearby hyderabad right now If you like it feel free and share it. Cheers. Arjun