The India of 2019 is very different from the one when this Hindustan Coca-Cola Beverage (HCCB) factory at Pune, was commissioned. Way back in 1996 – the same year that Rahul Dravid and Sourav Ganguly made there Test match debut.

Kedar Sapre, the Factory Manager of this factory in Pune was clued in.

He was witnessing this subtle but definite change. A manufacturing industry veteran from Maharashtra, who spent his early years observing his Engineer father run machines at the HEC factory in Ranchi, knew that change is the only constant. He needed to skill and constantly re-skill his workforce, if there were to stay relevant to the manufacturing sector.

He regularly started huddling his 100 strong workforce, coaching them on skill building and exhorting them to learn new things and expand their horizon. At the core of his strategy was Kaizen – small but sustained improvements in work processes and re-skilling his entire workforce for them to become more productive, employable and efficient.

Gradually, employees of this HCCB factory imbibed the virtues of being able to improve processes - be it man or machine. This factory is now a live example of skill building, much in the same way that the Prime Minister of the country envisaged it, when he launched the Skill India programme in 2016. The government’s program aims to get workers and youth, industry-relevant training to improve opportunities for their employment. Today, each of the more than 100 employees at HCCB Pune can do more than 5 different jobs, as and when needed! 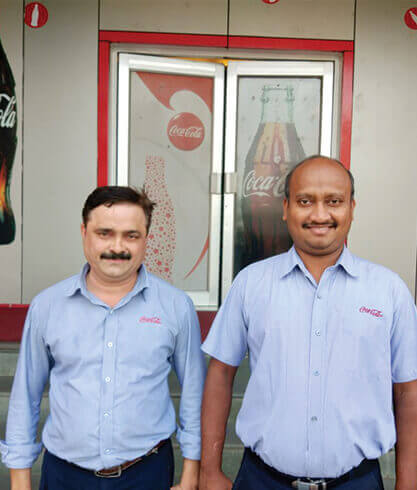 Nothing illustrates the change better than the story of Rahul Jamkar, a machine operator, who had joined HCCB in 1996 after working in another manufacturing set-up for a couple of years. For nearly two decades, he only had a simple role at the plant – to ensure that the filler was cleaned on time. But then, he actively started participating in the maintenance of machines for which he was not even responsible. He was beginning to learn that any problem at the factory is a collective responsibility and not just an individual’s ordeal.

“It was tough to go about the change. But we got to know something new,” the 1992 electronics graduate from the Industrial Training Institute says.

His colleague Nitin Joshi still remembers the day he had joined the plant – July 1, 1996. His job was to ensure that the returnable glass bottles (RGB) had been placed properly as they got ready to be filled with beverage.

He began to learn how to manage the reverse osmosis set-up and the art of making syrup - something that his family of four, including his mother, wife and daughter are now proud of. With the new approach, “it has become easier to work and the confidence is higher,” says the HCCB veteran.

The sense of achievement at having learnt a new skill was reigniting the passion at the workplace, while minor but continuous improvements in the technical and manufacturing processes was leading to improved SLEs. Soon, the employees christened themselves the Self-Managed Autonomous Result Oriented (SMART) team. A shining example of their commitment is the Water Treatment Plant (WTP), which for almost all factories is messy. The employees re-designed the WTP and brought about process improvements to a point, where today, not a drop of water can be found on the floor. In fact, until the time someone tells you that this portion of the factory is the WTP it is difficult to understand this.

“We wanted to change the way things were at the factory to a point where it became a best-in-class factory. That involved bringing about a change in culture and instilling a sense of ownership among the employees,” says Yogesh Bhavsar.

The factory has now been winning awards for ‘best factory’ in its category, for a number of years. It isn’t finished yet. Kedar thinks this factory can continue to win the best factory award at least until Rahul Dravid and Saurav Ganguly’s children make their mark in the international sports arena.

Kedar is clearly not being over ambitious!