Someone who embodied exemplary skill sets and remained relentless in his work finally went to sleep. Sadly, forever.

The operator who repaired and restored machines with a stubborn determination lost the battle of life to a terminal illness. The news of his passing away in early 2020 brought a pall of gloom at his workplace. The entire factory of HCCB located at Bidadi on the outskirts of Bengaluru, where he was working, was in mourning. Read on to know the attributes of S. Selvaraj, who was unquestionably one of the best in his craft.

Much like Samurais, the famed warriors of premodern Japan, Selvaraj had earned a name for himself. He would often place his hand gently on a 12-feet something combi blow molding machine and whisper in his native Tamil, “This is my machine. This machine is my God.”

Selvaraj’s love for machines coupled with his affable disposition marked him apart. No wonder, almost everyone inside the factory would be eager to stop and exchange a few words with him, even if they were just casual pleasantries.

In the large industrial suburb of Bidadi, it was hard to keep Selvaraj a secret for too long. Local vendors, who did bits and pieces of engineering work for the HCCB factory, regularly invited Selvaraj to fix their own little mechanical problems, something both Selvaraj and his seniors happily obliged.

And there was a good reason for this. Selvaraj fixed machines. His innate ability to spot and fix problems in highly sophisticated machines had earned him his sobriquet ‘machine doctor’. But the reasons why Selvaraj was held in such a high esteem by his co-workers were his unassuming manner, soft reassuring voice and the fact that he didn’t have any formal education in engineering. He was a 10th standard pass from a small town called Pollachi some 50 km from Southern India’s engineering capital Coimbatore. 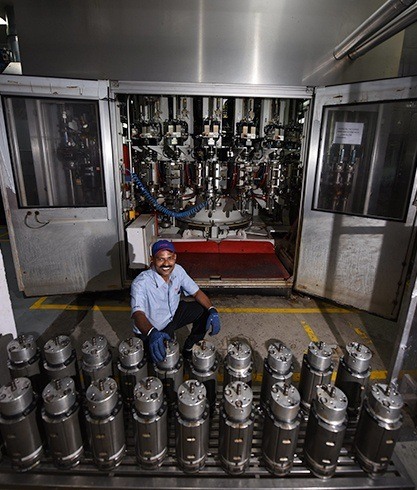 The soil Selvaraj grew up in explained his natural love for moving metal and rubber parts only as much as it did for G.D. Naidu, a self-made engineer and inventor from India’s pre-Independence era. Naidu, whom the local media of the time credited him with a slightly over-enthusiastic title of ‘Edison of India’ made a name for himself by creating India’s first electric motor that was a precursor to many other gadgets that followed like a super-thin shaving blade, a distance adjuster for film cameras, a fruit juice extractor, a tamper-proof vote-recording machine, a kerosene-run fan and even a two-seater car.

Selvaraj had endeared himself to his peers and supervisors by offering simple solutions that saved money and time. His recent contraption was a ‘base mold flushing tool’ that he had invented to clean the molds (used for producing PET bottles) at nearly a fifteenth of the speed it was done before. When a critical rubber bush in another machine needed to be replaced, Selvaraj did not hesitate to find a local engineering shop to reproduce the original imported part at nearly a seventh of the cost. He had even found ways to push the rated life of oven spindles from 12,000 to 26,000 hours. His natural ability to find quick, simple and economical solutions to machine or processes-related challenges had made him a hero among his colleagues.

For the many more timely interventions, Selvaraj had earned some 35 Kaizens at the HCCB factory. Kaizen is a Japanese shop floor philosophy that simply means improvement, continuing and continuous, that presumes that perfection is an ever-moving destiny. His managers clarified that anyone else of Selvaraj’s experience inside HCCB could at best claim 2-3 Kaizens.

The practical application of Selvaraj’s natural inventiveness augured well with what HCCB was trying to achieve across its factories in India. Recalling the contributions of Selvaraj, Bheemannappa Manthale, Factory Manager at the Bidadi plant, said, “We always valued his opinions. And his influence still lingers on the shop-floor where he brought the machines to life. Selvaraj’s ability to reduce cost of repairs and maintenance every single year even as the machines continued to age without compromising on quality and safety can never be forgotten.”

Bheemannappa became emotional remembering the contributions of Selvaraj. “His indomitable spirit was simply infectious. The only way we can pay a befitting tribute to Selvaraj is by imbibing the work ethos that he possessed.” Looking glumly at the machines, the factory manager echoed the feelings of all his colleagues, “Selvaraj will be missed.”